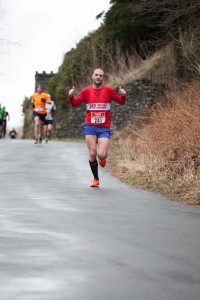 Meet Anthony Durkin – he’s got a great story! We’re so glad we could be of help.

Between the age of 16-22 I ran at a good level, and competed for my regiment when serving in the Army.

Unfortunately on leaving the forces in 2005, I broke my lower left leg really badly. I fractured the tib & fib above the ankle and also fractured my shin at the very top just below the knee.

As a result of the severity of the injury, I was told that I wouldn’t run again, which was devastating. I was lucky to even keep my leg.

I am now in the fourth year of my return to running and in the last 16 months it has become pretty serious.

My comeback was complete in 2014 after completing the Paris & Chester Marathons. Something I have wanted to do for a couple of years. At Chester I ran 3:03:52 which saw me achieve a good for age time. All this despite suffering severe cramp between miles 18 & 26.2. I found that on most runs over 15 miles and even at Half Marathon distance due to the intensity of the run that I was suffering from cramp too often. At mile 20 I was on for a time of 2:53. 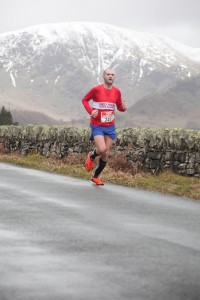 The area that the cramp kept affecting me is in my lower left leg where I had my fasciotamy. The issue was severely affecting my pace, so something had to be done. Compression socks were something that I had considered for some time.

So back in December I received my VR Performa compression socks after receiving some great advice from Emma at VR.

Unfortunately they didn’t get much use during my first month of London Marathon training due to illness. However for the last 5-6 weeks they have covered a lot of miles.

I have covered more than 200 miles in that time and I am not exaggerating when I say that my calf muscles haven’t ached once. Even better is that I haven’t had one painful twinge in my lower left leg, nor have I had one instance of the cramp that has hampered me since entering the world of long distance running.

I ran the Haweswater Half Marathon in a very snowy and cold Cumbria on Sunday the first of March.

Although I haven’t suffered from cramp since using my VR Performa compression socks, I was worried that I would suffer from it because of the cold and wet conditions.

The most important thing is that the cramp was kept at bay. I honestly believe that it’s down to the socks. 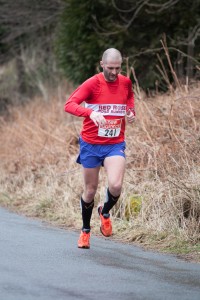 I can now go into my Paris & London marathons in April knowing that I can rely on VR Legwear.

Hopefully I can achieve the 2:55 marathon that I am aiming for before heading to Kenya for some high altitude training in Iten, before heading for the Lewa marathon.

In addition to wearing VR Performa during my runs, I also wear VR – ProPlus Recovery compression socks to aid my recovery post run.

I definitely recommend VR Compression to everyone who runs. They have worked wonders for me. As well as doing what they are designed to do, they also look great and they are very comfortable to wear.

Enter code ‘RUNNER10’ for your 10% discount on www.vitalactive.com

Buy now from our trusted partners at

We use cookies to ensure that we give you the best experience on our website. If you continue to use this site we will assume that you are happy with it.Close Message